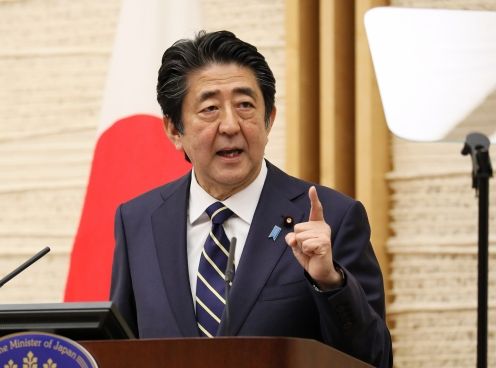 TOKYO – Prime Minister Shinzo Abe on Thursday expressed his belief that Japan will overcome the ongoing novel coronavirus pandemic with the cooperation of the people.

“I believe all the nationals are having a hard time from the constraints in their daily livelihoods over a prolonged period, and it would be very stressful as I could easily imagine. But we see steady progress from our past efforts,” Abe said during a televised press conference at the Prime Minister’s Office.

He said that the Japanese government is preventing further spread of infections, and suggested making a lifestyle change to beat COVID-19.

“We are in the process of developing our new mode of life, which is a very tough challenge. However, this is a challenge with the cooperation of our nationals. I am confident that we are definitely going to overcome this,” he asserted.

Abe announced the government's decision to lift the state of emergency in 39 of the country’s 47 prefectures ahead of its planned expiration on May 31 as the spread of the virus has declined. But Tokyo, Osaka, Chiba, Kanagawa, Saitama, Kyoto, Hyogo and Hokkaido remain in place until new cases of infections have significantly dropped.

“On May 21, we will hear opinions from the experts. If we deem it possible, we will not wait for May 31 -- we will seize state of emergency for those remaining prefectures.”

The Japanese leader also called on people to stay indoors and avoid moving to the countryside and other areas.

“We should not let down our guards, that’s the cooperation we need from the people.”

Abe initially declared a one-month state of emergency until May 6 for seven prefectures. He then expanded it to the entire country on April 16 before extending it through the end of May. - Florenda Corpuz

PAL Plans to Resume Some Flights from June 1