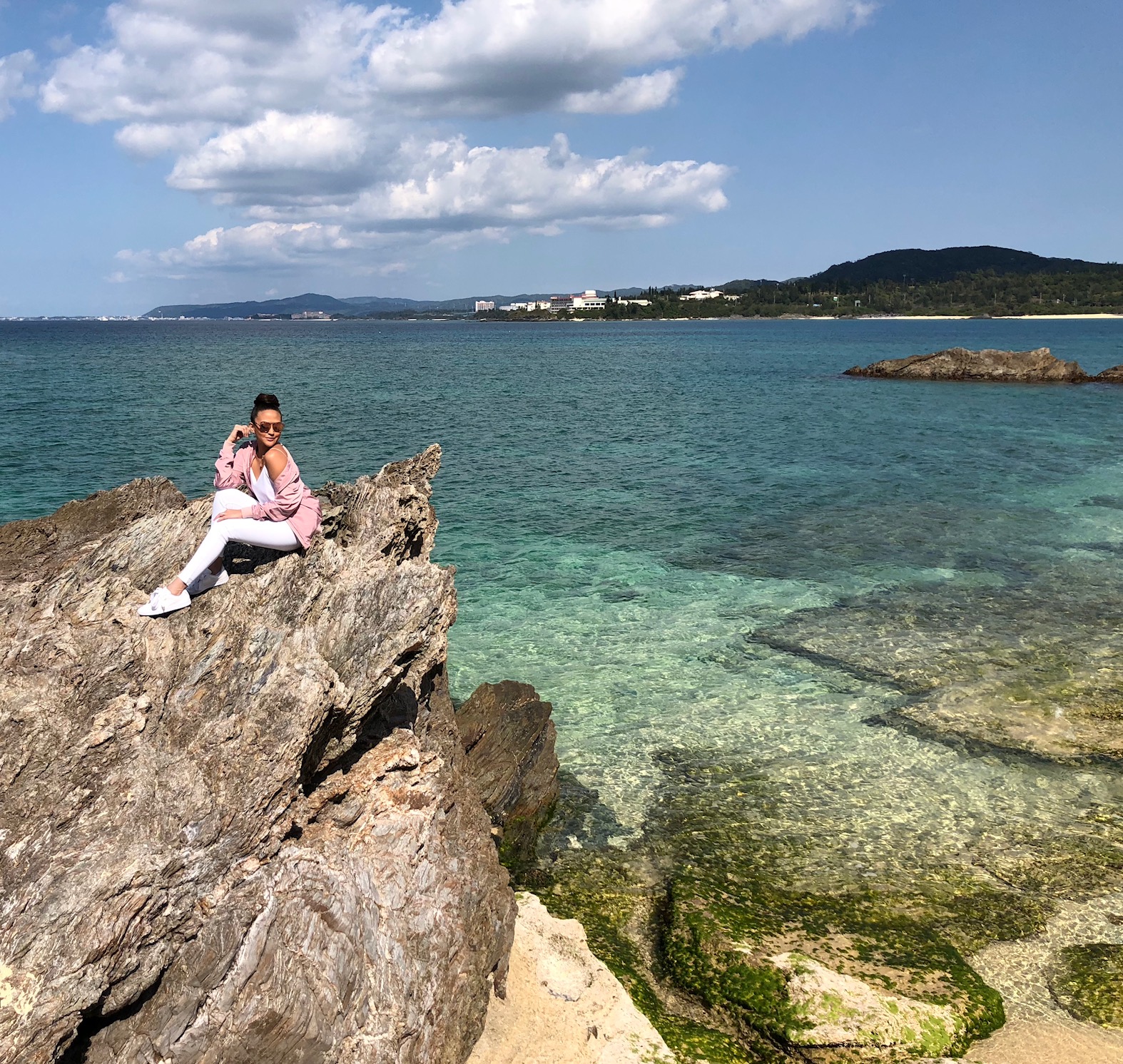 In 2012, TV host Cesca Litton granted Filipino-Japanese Journal (blog) with an exclusive interview about her trip to Tokyo where she expressed her fascination with the Japanese culture, weather, food and people.

Six years after, Cesca went through several changes in her career and personal life. From being an entertainment host of ABS-CBN, she became a sports anchor of CNN Philippines’ “Sports Desk” for three years.

She got married in 2015 to businessman Tyke Kalaw at the luxurious Eskaya Beach Resort & Spa in Panglao Island, Bohol. She took a temporary break from hosting when she was diagnosed with thyroid problem in late 2016.

Now, Cesca’s active again in the limelight. But if there’s one thing about her that has remained consistent all these years is her love for traveling. Recently, she visited Okinawa with actress Denise Laurel.

FJJ: What made you visit Okinawa?

Cesca: I was extremely fortunate to be part of a sponsored trip by the Japan National Tourism Organization (JNTO), and it was even better because I got to travel with a dear friend, Denise (Laurel).

FJJ: What can you say about the Okinawan culture?

Cesca: I’ve always been vocal about my love of the Japanese culture, and experiencing another side of Japan in Okinawa just increased it exponentially. It was fascinating to see Japanese culture infused with Chinese culture, as it was explained to me that Okinawa was once a tributary of China. But I think what surprised me the most was how popular taco rice is in Okinawa! I had a couple of bowls of taco rice while I was there, I loved it.

FJJ: What is your favorite place or experience there?

Cesca: I loved exploring Onna Village, the beach was beautiful, and there was a cliff overlooking the ocean. I love any place that lets me just enjoy nature for what it is. And we got to ride ATVs at this place called Yambarunture that was so much fun! There was a trail through a forest area that had all these puddles, and our guide’s name was Sushi, who made our ATV adventure even more enjoyable. I also got to try Ishigaki beef for the first time. Denise and I were also able to wear the ryuso, the Ryukyu Kingdom’s traditional costume worn by royalty, when we went to Okinawa World, and it was so exquisite.

FJJ: What is it about Okinawa that you love?

Cesca: It mixes the best of both worlds. Japanese modernity, but at a slower pace compared to what you’d usually experience in Tokyo. City in one block, ocean the next. And so many different cultures infused in one place. Also… Can't forget about that Ishigaki beef. (laughs)

FJJ: Any other places that you want to explore in Japan next time?

Cesca: I have yet to explore the northern areas of Japan. I actually had a rail pass when I went to Japan last December, was able to explore Nara, Kyoto, and Osaka, and stayed in Tokyo again. I really wanted to check out Niseko and Sapporo but, if I remember correctly, Niseko is about a 7-hour trip via bullet train from Tokyo and I had to fly back to Manila for a friend’s wedding so I didn’t have enough time. I will, someday.

FJJ: What are your travel essentials and tips?

Cesca: I’m a girl scout so I tend to pack random things that I think I’ll need (that I don’t end up using, more often than not) but I think the most important thing to remember is that we are just visitors in someone’s home, and that traveling is one of the best forms of education a person can have. Learn the culture, appreciate it, respect it, and take the best of it home with you.

FJJ: What is the best part about traveling?

Cesca: Being able to experience an entirely different world from what you’re used to. I will never stop being that wide eyed adventurer amazed by how big the world is.