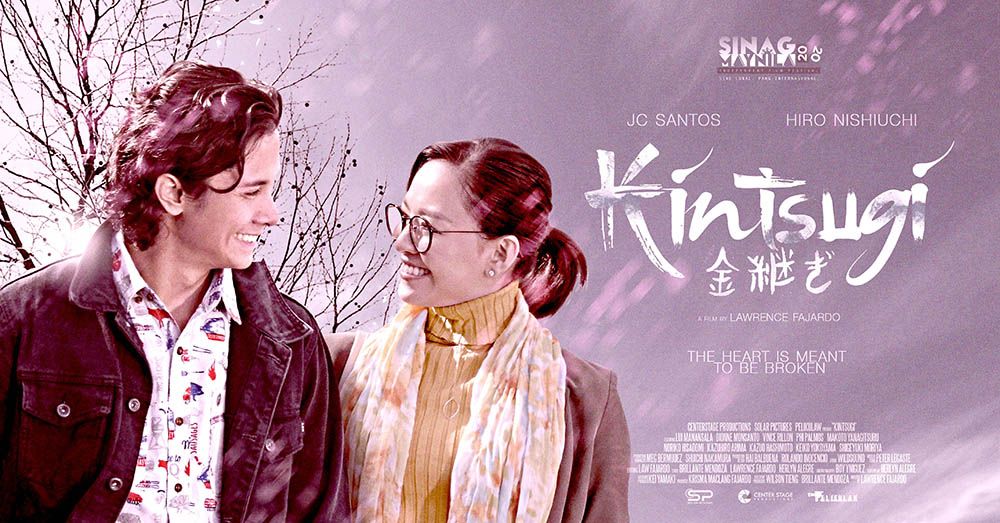 We recently had the chance to catch up with Tokyo-based Filipino screenwriter Herlyn Alegre about her latest screenplay “Kintsugi (Broken),” which is set to have its world premiere at this year’s Sinag Maynila Independent Film Festival in the Philippines.

Directed by Law Fajardo, “Kintsugi” centers on the relationship of Dante (JC Santos), a Filipino laborer in a pottery factory, and Harue (Hiro Nishiuchi), a teacher, potter, and kintsugi practitioner from Saga, Japan. The two find love in the most imperfect time and place as they juggle filial duties, adjusting to a new culture, the difficulty of living overseas and the pursuit of personal happiness.

The film is Alegre’s second collaboration with Fajardo – first was the Virgin Labfest play turned award-winning movie “Imbisibol” in 2015.

How did Kintsugi find its way into a script and now to the big screen?

Herlyn: When this film project first came up, I felt it was another opportunity to tell another aspect of the lives of Filipinos living in Japan and, possibly, share the beauty of the message of the art of kintsugi. Since I found out that a craft like this existed, I’d been dreaming of writing a story that would incorporate its elements as well as the values represented by this process. So, when I was informed that our new film would be set in the scenic historical pottery town of Saga, I thought, this art could be introduced in the film as a central metaphor. And after many months of working hard on it, the whole team is now very excited to see it as part of the line-up of Sinag Maynila for this year.

What was your inspiration in writing it?

Herlyn: I found it very difficult to write a love story that was not too simplistic or overly mushy, so I often found myself stuck with ideas I barely believed myself. But every time I found myself stuck or cynical about telling a story of love, I go back to my Christian values, and remember that we can love because God first loved us.

Which places in Japan did you shoot the film? Was it also shot in the Philippines?

Herlyn: We shot most of the film in Saga, with beautiful cherry blossoms in the background. But some parts were also shot in Pampanga, a province in the Philippines also famous for pottery.

What is the theme of the film, and what message does it want to convey to the audience?

Herlyn: Kintsugi tells a story about finding beauty in the imperfections of life. This is not to say that we ought to tolerate mistakes or entertain mediocrity, rather, it’s about loving imperfect people, finding peace in imperfect timings, and forgiving our imperfect selves. There are many things in life that we’re not expecting to find or experience, most of them are not even part of our plans or way out of idealistic visions we have for ourselves or the future. This is an imperfect world, but that doesn’t mean we cannot find hope and healing in it. Once we recognize how broken we are, our healing begins.

This is your second time working with Law Fajardo, how do you find him as a director, and how would you describe your working relationship with him.

Herlyn: The more we work together, the more we get to understand the creative processes of each other. And no matter how complicated our processes are, we always reach a point where our visions intersect, and when that happens, it turns out to be a rewarding creative experience. Even though conceptualizing this movie was really difficult for us because it was our first attempt to create a film in this genre, I really believe in his talent, and I know he would find a refreshing take on this genre, and subject matter that would totally present a visual narrative that is true to the visions we have for the film.

What are your hopes for the film, and what do you look forward to in its participation at Sinag Maynila?

Herlyn: I am very excited to, once again, be a part of Sinag Maynila. I am very grateful to be given the opportunity to share our story, and I hope that our film would become a safe space where people could find hope in what is to come despite the surfacing of many discouraging issues around us today. This does not mean that we should live in a vacuum of idealism, but rather, may it inspire us to take action – move on, forgive, let go, love again, and fight for the things that are worth fighting for.

How is Kintsugi similar and at the same time different to Imbisibol?

Herlyn: Kintsugi is similar to Imbisibol because it also portrays what life in Japan is like as an OFW, but different when it comes to the milieu, as it is set in the present time. While many of the themes presented in both films are very familiar to viewers, Imbisibol tackles the nature of relationships among Filipinos living overseas, while, on the other hand, Kintsugi presents a narrative about the different aspects of relationships that exist between Filipinos and other foreign nationals they encounter when they work in a foreign land. - Words and interview by Florenda Corpuz