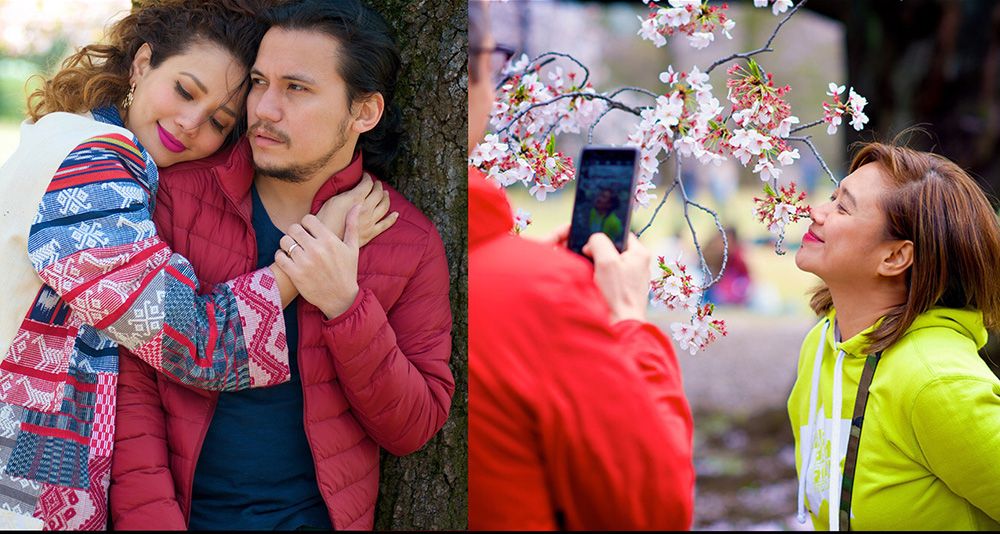 Many consider the spring season as the most delightful time of the year – the weather is fine, the flowers are blooming, the trees are greener and sturdier. The colorful surroundings add up to romantic ambience of certain places.

It is for this reason that we remember two couples, who genuinely enjoyed springtime in Japan: award-winning actress Eugene Domingo and her Italian boyfriend Danilo Bottoni; and actress-singer Karylle Tatlonghari-Yuzon and her husband Sponge Cola vocalist Yael Yuzon.

The couples spent their vacation in 2017 and 2018, respectively when cherry blossoms became a beautiful backdrop to some of the beautiful places in Japan.

One of Eugene’s dreams is to visit Japan and see the cherry blossoms. During the springtime in 2017, the veteran comedienne went to Tokyo to specifically see the sakura with the love of her life, Danilo.

She admitted that the trip was so special to her because she was with Danilo, and it was his first time in Japan.

They frolicked under the cherry blossom trees – laughed at each other’s banter, stole glances, and took as many photos as possible. They were a picture of a couple, who was happy just by being in each other’s presence.

“Every moment is unforgettable. Visiting the parks, temples, museums, eating, doing nothing, enjoying spring. Japan is unique and nothing similar to the Philippines and Italy, so it is definitely special,” Eugene said in our exclusive interview.

The Adventures of a Happy Couple

Yael and Karylle went to Tokyo in 2018 mainly to see the cherry blossoms and to visit Tokyo DisneySea.

The trip was Karylle’s second time while it was a first for Yael.

They gave Filipino-Japanese Journal (FJJ) the opportunity to have their pictures taken at Shinjuku Gyoen where cherry blossoms were in full bloom. One could sense their adventurous and happy disposition four years into married life.

“I like how everyone here is disciplined. It manifests in the design of things, in the way traffic flows, in the way new meets old, it meets adventures, and it meets crazy. I like how a store can be selling an item for 400 yen and then next to it is worth 1.1 million yen. Sa Tokyo, parang you’re going to walk in a lot of expectations pero parang iba pa rin talaga e,” Yael said.

“Japan is a place where you think you’ll get to know well but you’ll leave thinking that you know less of it,” he added. - Words by Nel Salvador, Interview by Florenda Corpuz, Photographs by Din Eugenio

Experience ‘Life Along the Line’ Through Tokyo Sakura Tram