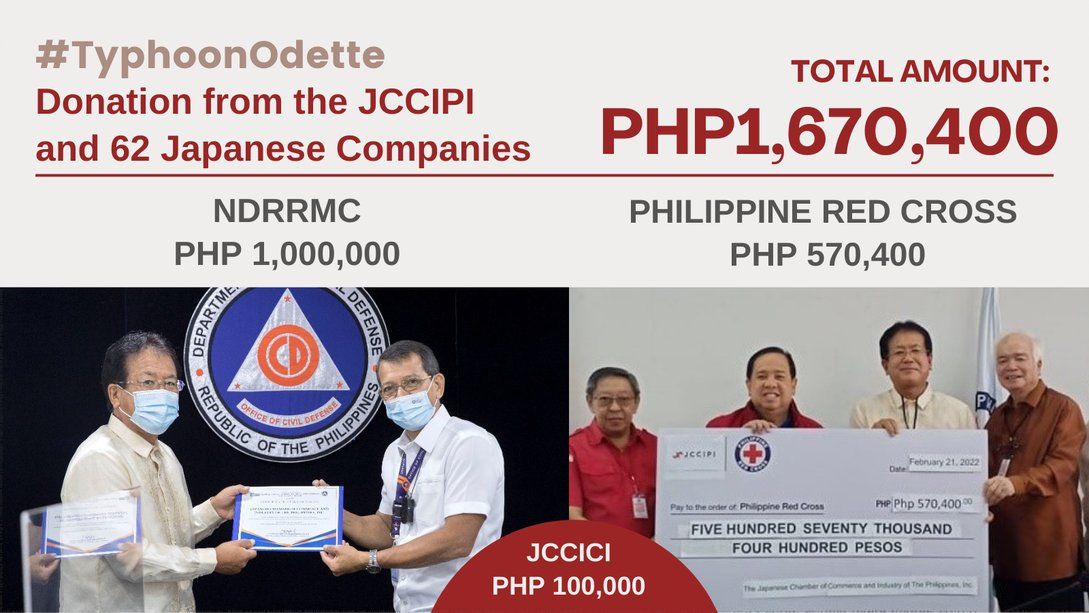 MANILA – The Japanese people’s response efforts for communities hit by Typhoon Odette continue, with recent donations from the Japanese Chamber of Commerce and Industry of the Philippines (JCCIPI) and 62 companies amounting to PHP1.67 million.

“I felt very proud of my fellow countrymen,” Japanese Ambassador to the Philippines Kazuhiko Koshikawa said in a tweet.

He added that the JCCIPI informed him of the donations.

“A friend in need is a friend indeed,” he went on.

The donations have been presented to the National Disaster Risk Reduction and Management Council (NDRRMC) and the Philippine Red Cross (PRC) on Feb. 21.

“We have already received donations and supplies from several Japanese companies, and we are very grateful for the warm support from our friend Japan, including the recent donation from JCCIPI. Thank you from the bottom of my heart,” NDRRMC Assistant Secretary of State Hernando said.

Senator Richard Gordon, the chairman and chief executive officer of PRC, also expressed his gratefulness for the donation from JCCIPI.

"The Philippine Red Cross does not have abundant budget, but it has continued to support disasters abroad, and it is not a large amount. We are also sending donations for the damage caused by the tsunami caused by the 2011 Tohoku Earthquake, and this mutual aid relationship between the two countries is extremely important,” he said.

The JCCIPI, together with its member companies, said that they will continue to help the victims of the typhoon “so that they can completely resume their economic activities as soon as possible and regain their daily lives.” - Florenda Corpuz