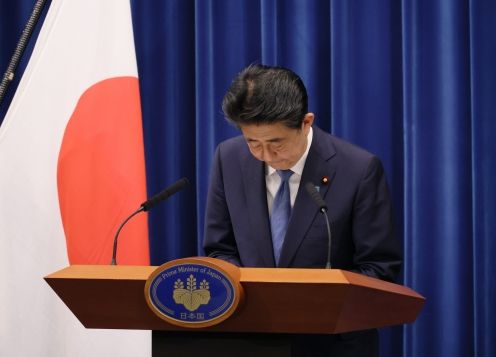 TOKYO – Shinzo Abe, Prime Minister of Japan, announced in a news conference on Friday that he has decided to step down to deal with health issues.

Abe, 65, who has managed his chronic illness -- ulcerative colitis for nearly eight years, said he had suffered a relapse of the disease.

Part of his statement in Japanese translates to English as: “Thirteen years ago, my chronic ulcerative colitis took a turn for the worse. In just one year, I suddenly resigned from the post of prime minister, causing great inconvenience among the public. Later, fortunately, a new drug was very effective, and I returned to great shape physically. I again took up the weighty responsibility of serving as prime minister, thanks to support from the people. Over the last almost eight years, I have kept my chronic illness fully under control and have had no trouble devoting all of my energy every day, day after day, to the job of prime minister.

“However, I was told during a regular checkup in June that symptoms of a relapse could be seen. Since that time I have continued to devote all my energies to my duties while taking medicine, but from roughly the middle of July something unusual happened to me health-wise, and I began to get quite physically exhausted. Then, at the beginning of August a relapse of my ulcerative colitis was confirmed. As for my treatment from now, a new drug has been added to the medication I have been taking until now. At the re-examination I underwent at the beginning of this week, this new drug was confirmed to be effective. But it is necessary to have this medicine administered continuously for a while and it is difficult to foresee the result.

“In politics, the most important thing is to deliver results. I have been saying this ever since my administration was inaugurated, and over these seven years and eight months, I have dedicated myself completely to achieving results. It would be unacceptable if I were to err in an important political decision or fail to achieve results because of the pain of not being at peak physical condition while being sick and undergoing treatment. I have made the determination that, as I have become unable to confidently live up to the mandate from the people, I should not continue in the position of prime minister.

“I will resign my position as prime minister.

“We must avoid to the greatest possible extent a situation in which our response to the coronavirus, the most important issue right now, encounters obstacles. For the past roughly one month, this has been my entire focus. I worried about this terribly. For now, the spread of infection that we had seen from July has shifted into a declining trend and we succeeded in compiling countermeasures to be implemented with our eyes fixed firmly on the winter. I decided that if we are to transition to a new administration, this is the only timing possible.

“I have taken on a wide range of challenges over these seven years and eight months. Regrettably, there are also many issues that remain. At the same time, there are things that I achieved or made a reality in the course of taking on various challenges. All of this is thanks to the people, who placed strong confidence in us and encouraged us during each national election. I thank you sincerely.

“Despite such support, I am to resign with another year in my term of office—a year still left to go— leaving various other policies still on the way to being realized and the coronavirus epidemic at hand. I express my heartfelt apologies to the people for this situation.

“I intend to manage to recover my physical health fully through my treatment and support the new administration as a member of the Diet.

“I thank the Japanese people sincerely for these eight years.”

Abe was first elected as prime minister in 2006. He resigned in 2007 due to his illness, returned to power in December 2012 after overcoming the inflammatory bowel disease, and on Aug. 24 became Japan's longest-serving prime minister having led the country’s government for 2,799 consecutive days. - Florenda Corpuz