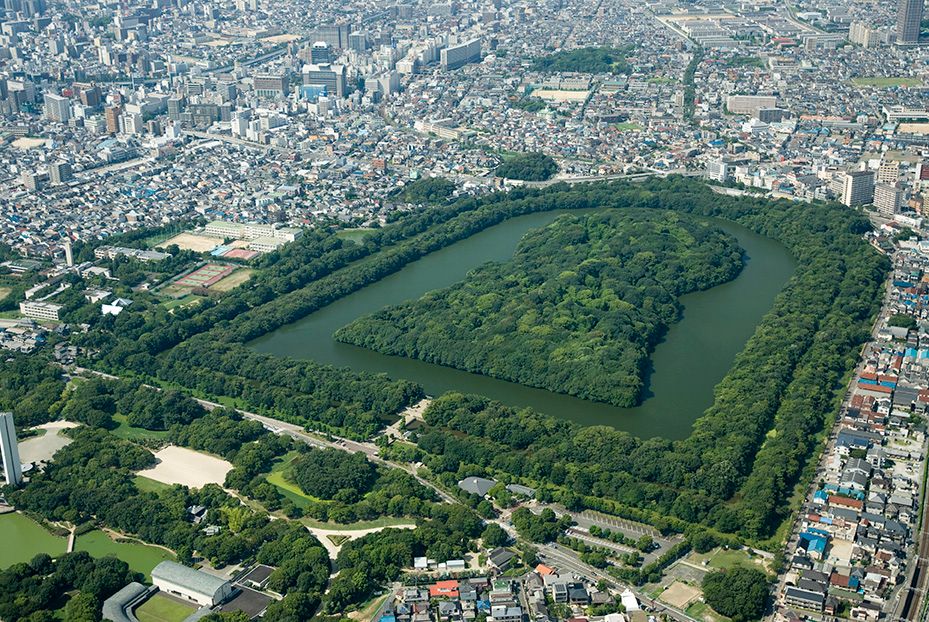 The Mozu-Furuichi Kofun Group is comprised of a large mounded tomb group that are scattered all throughout the southern plain of Osaka Prefecture. These mounds are actually tombs and there are 49 of them in total (23 in the Mozu area and 26 in the Furuichi area).

The site is of incredible historical importance. It is an enduring evidence of the tomb building tradition during the period of ancient state formation between the late 4th and early 6th century. The cluster is home to a wide variety of tombs that include large scale keyhole- shaped mounded tomb as well as relatively small round mounded tomb and square mounded tomb.

Of all the tombs included in the Mozu-Furuichi Kofun Group, the largest is the Nintoku-tenno-ryo Kofun. Though not as well known internationally, this mounded tomb is actually one of the biggest in the world with a length of 486 meters and a height of 35.8 meters. In fact, the Nintoku-tenno-ryo Kofun is actually of comparable size to the Great Pyramid of Khufu in Egypt (230 long, 146 meters high) and the Mausoleum of the First Qin Emperor in China (350 meters long, 76 meters high).

“We welcome the inscription of the Mozu-Furuichi Kofun Group on the World Heritage List. By getting a first wave of trailblazers to visit new destinations, we hope that they will become advocates on social media, thereby kicking off a virtuous cycle that could even further improve the number of foreign visitors,” said Tadashi Kaneko, the Executive Director of Global Strategy Headquarters at Japan National Tourism Organization (JNTO).

In JNTO’s eyes, the Mozu-Furuichi Kofun Group is a technological marvel for its time. The tombs are a geometrically sound earthen architectural masterpiece that is evidence of just how advanced those living in this region of Japan were for their time. Moreover, the Kofun group is also a paragon example of the Kofun period’s unique culture characterized by the expression of power through the formation of burial mounds. The sheer size of these structures gives insight into what the sociopolitical situation of the communities living here were like.

“With the inscription of the Mozu-Furuichi Kofun Group on the list of World Heritage Sites, JNTO hopes that more overseas visitors will consider adding it to their travel itineraries,” the organization said in a statement.

The area around the Mozu-Furuichi Kofun Group also has a wide variety of other tourist attractions to enjoy too. Those lucky enough to visit will also have the opportunity to partake in a unique cultural experience, sample local food and witness some authentic historical architecture.

The 21st floor of this building features a 360 degree panoramic view. At a height of 80 meters, Sakai City Hall is a popular spot that offers a bird’s-eye view of the city below along with the Nintoku-tenno-ryo Kofun, the Abeno Harukas building, Mt. Ikoma, Mt. Kongo, and Mt. Rokko.

2. Take a Virtual Tour of the Mozu Cluster

With a VR headset, users can experience a 360-degree view of the Mozu Cluster. The virtual reproduction is based on original footage shot by a drone at a height of about 300 meters.

Other Tourist Attractions Around the Mozu-Furuichi Kofun Group

The principle image at Fujiidera-Temple, established in 725 at the behest of Emperor Shomu, is a seated sculpture of the goddess Kannon. The statue has a thousand arms and eleven heads and has been designated as a National Treasure of Japan. The temple belongs to the Shingon sect of Buddhism and is the 5th site on the Saigoku 33 Kannon Pilgrimage.

This company produces a local take on fried kamaboko (steamed fish paste) known as “Kofun- ten.” Resembling the shape of the area’s iconic tumuli, these snacks taste as great as they look. Each cut of fish is carefully selected by hand before being kneaded on old-fashioned stone mills.

Often hailed as Japan’s oldest national highway, this road boasts over 1,400 years of history and was recognized as on the Japan Heritage list in 2017.

This brand produces a type of mud dye called bengala. Though traditionally used to paint Japanese houses, the iron oxide based dye can also be used to color cloth too. At Koshoku-no-Bi’s facility, visitors can partake in a one-day workshop experience bengala dyeing for 2,500 yen.

●Buddhist Monuments in the Horyu-ji Area

●Historic Villages of Shirakawa-go and Gokayama

●Shrines and Temples of Nikko

●Gusuku Sites and Related Properties of the Kingdom of Ryukyu

●Sacred Sites and Pilgrimage Routes in the Kii Mountain Range

●Iwami Ginzan Silver Mine and its Cultural Landscape

●The Architectural Work of Le Corbusier, an Outstanding Contribution to the Modern

●Sacred Island of Okinoshima and Associated Sites in the Munakata Region

Kathryn-Alden Movie to be Screened in Japan