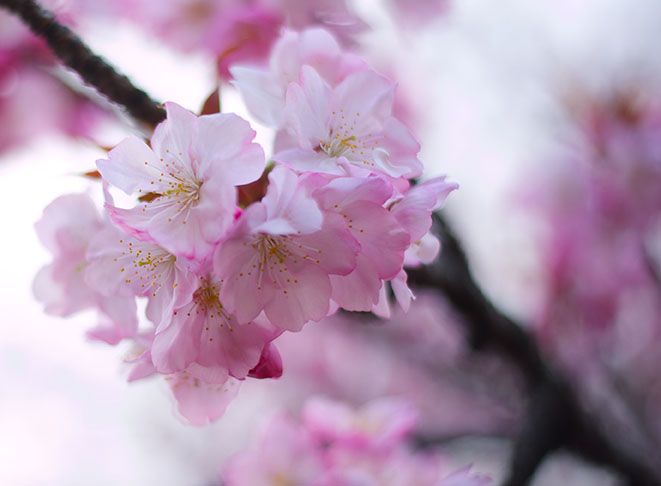 In contrast to autumn’s fiery red and orange, spring paints the landscape with gentle colors of white and pink as cherry blossoms line the sides of rivers or surround old castle grounds. Hanami or “flower viewing” started as far back as the Nara Period (710-794), when plum or ume was more popular than the cherry blossoms or sakura. However, centuries later, as the cherry blossoms gained the attention of more people from the court, cherry blossoms viewing became more popular. In Japanese literature, the word sakura became somehow synonymous with the word hana as the latter word was used in tanka and haiku to describe the cherry blossoms in particular.

Emperor Saga in the Heian Period (794-1185) was known to be a big fan of hanami. He would hold parties under the cherry trees in the Imperial Court in Kyoto and serve food and sake to the Imperial family and their guests. Hanami was then limited to the members of the court and the elite members of the society, however, several centuries later, it spread to the commoners when farmers started visiting mountains during springtime and having lunch under the cherry trees.

In history, Toyotomi Hideyoshi, one of the three great military leaders who became instrumental in unifying Japan, was known to be very fond of throwing extravagant hanami parties. In 1598, he threw a party at the Daigoji Temple in Kyoto for his most trusted retainers. Some of these glamorous parties were even immortalized in folding screens and later on in wood block prints.

In the Edo Period (1603-1868), the shogun Tokugawa Yoshimune ordered the planting of cherry trees in public areas such as parks in Asukayama, Mukojima, and Koganei that greatly encouraged the practice of hanami among the common people.

The Significance of the Cherry Blossoms

The most popular kind of Japanese cherry blossoms is called somei-yoshino. It is very beautiful when in full bloom but only has a life span of about two weeks. Yearly, cherry blossoms forecast are released by different public and private agencies. Some cherry blossoms bloom as early as February in Okinawa and as late as May in Hokkaido. Below is a schedule of the estimated time of bloom in six key areas in Japan:

Estimated Time of Bloom: May 1

In most prefectures, the cherry blossoms start blooming at the beginning of April that coincides with the start of a new school year or the time when new employees enter the company. Viewing the cherry blossoms during this period marks a new beginning that makes this practice even more significant for most people. The cherry blossoms symbolize the beauty and transience of life. They reach their finest, fullest state and then fall down at the peak of their splendor. This symbolism is also commonly associated with the values of the warrior class and the brevity of life.

After centuries of enjoying hanami, people in Japan still camp out under the cherry trees every spring. They bring and share home-cooked meals and drink sake as they raise a toast to life, love or whatever beautiful thing they have been dreaming or hoping to have. Sometimes they sing songs, play cards or just share stories under the shade of the beautiful trees. Families, friends as well as colleagues do this together in spring. It is a time to share one’s fleeting moments and remember that life, though short and impermanent, is beautiful, just as the cherry blossoms are. - Words by Herlyn Alegre, Photograph by Din Eugenio