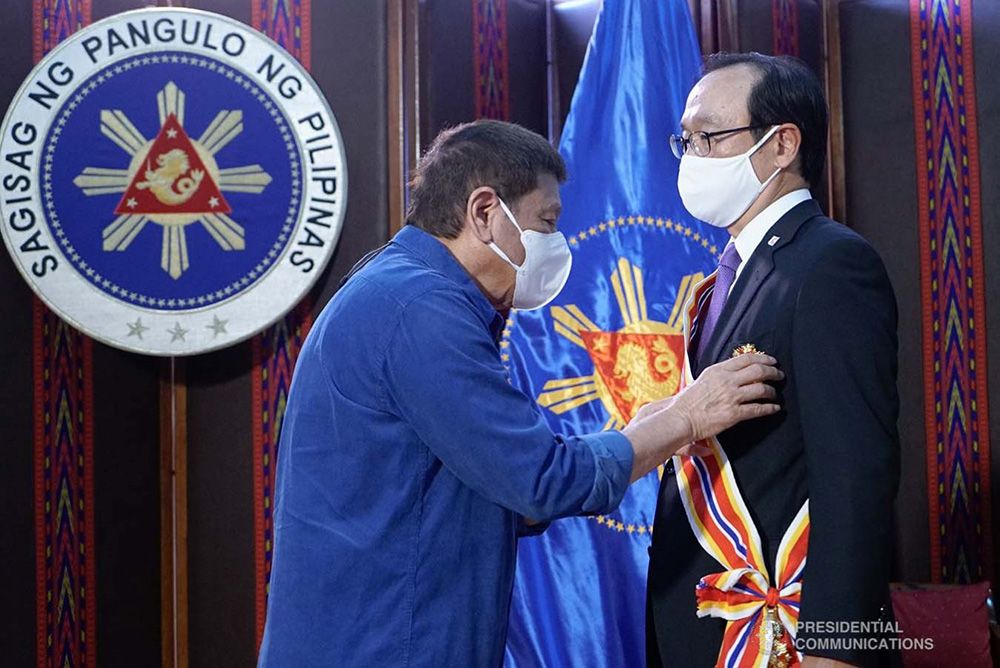 MANILA – President Rodrigo Duterte conferred the Order of Sikatuna, with the Rank of Datu (Grand Cross), Gold Distinction on exiting Japanese Ambassador to the Philippines Koji Haneda on Nov. 10.

Haneda paid a farewell call on the Chief Executive at the Malago Clubhouse in Malacañang Park.

In a statement from the Office of the President (OP), Duterte thanked Haneda for his contributions in “strengthening and deepening the strategic partnership and overall bilateral relations between the Philippines and Japan since he assumed post in 2017.”

Former Prime Minister Shinzo Abe was the first head of state to visit the country after Duterte assumed office in 2016.

According to the OP, under Haneda’s tenure, the two countries “enhanced their cooperation in infrastructure, education, transportation, maritime security, emergency assistance, and trade and investments.”

“Japan remains a major partner of the administration’s ‘Build, Build, Build’ program and a key supporter of the Mindanao peace process, ongoing transition to the Bangsamoro Autonomous Region in Muslim Mindanao, and rehabilitation of Marawi City,” it added.

Duterte likewise conveyed his appreciation for “Japan’s generous and consistent support in the Philippines’ fight against COVID-19 through aid in emergency response and economic recovery efforts,” and the country’s inclusion in the clinical trials of Avigan.

Meanwhile, Haneda reaffirmed the value of the Philippines-Japan strategic partnership, while citing gains made in stronger cooperation, particularly in infrastructure, maritime domain awareness, countryside development, and the peace process in Mindanao.

He recognized the further strengthening of already strong ties between Japan and the Philippines during his stint and thanked Duterte for all the assistance as policy guidance supported through Cabinet secretaries.

He also thanked the President for the honor of receiving the Order of Sikatuna and vowed to always be a “true friend of the Philippines.”

The outgoing Japanese envoy also recalled his many warm memories and the great strides achieved by the Philippines since he started his foreign service career, which began with his first foreign posting in Manila and ended in the Philippines as well. - Florenda Corpuz