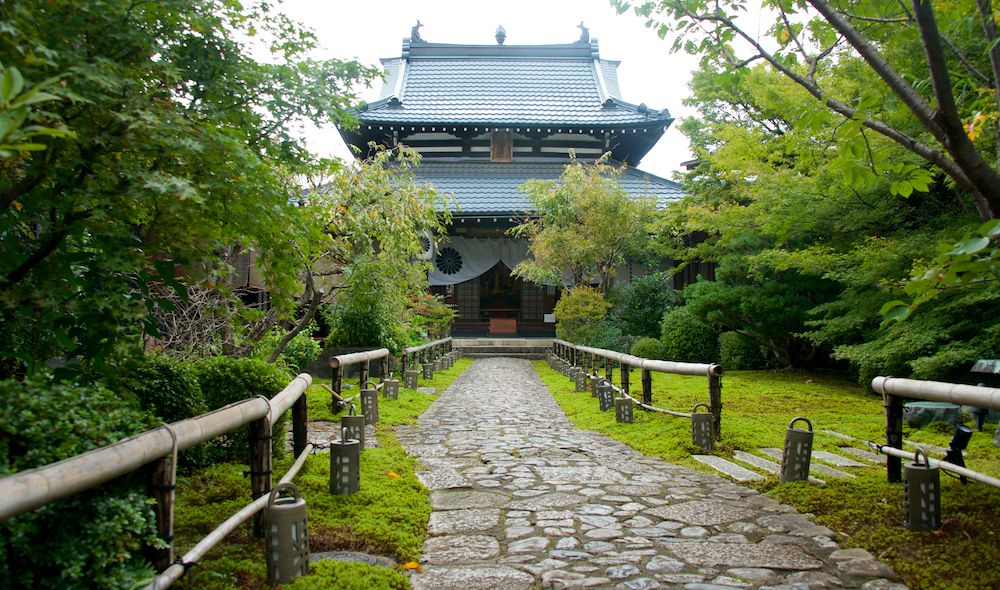 Kanga-an Temple, situated in the northern part of Kyoto, has its own share of interesting history, contributing to the glorious past of the former capital. However, more than just being one of the 1,600 Buddhist temples in Kyoto, it possesses one exceptional attribute – it has a small relaxing bar, hidden behind the grandeur of the beautiful temple façade.

Kanga-an’s history is closely intertwined with the reign of Emperor Go Mizuno, who commissioned this temple to enshrine the sacred spirit of protection in 1671. The head priest of Manpuku-ji Temple was given this task and this religious site became a Zen temple under the Obaku sect. Because of the Emperor’s close ties to the temple, some of his treasures are kept still in the temple including a golden crown, which now rests on the head of a (supposedly) thousand-year old Buddha, together with invaluable woodblock prints made by a notable artist in the Meiji Period named Jukuchu Ito.

After centuries of peaceful existence, Kanga-an Temple opened its doors to the public not only to perform religious rites but also to experience a slice of temple life. For about 30 years, the temple has welcomed people who are interested to try the kind of meals the monks of this sect partake. One part of the temple complex is transformed to a relaxing restaurant that serves Fucha Ryori, a Chinese-inspired vegetarian meal that has its own appeal that is distinct from the more traditional versions of the Shojin Ryori. The kanji characters used for the word Fucha literally means “to drink together with other people” but it also means to share a meal with other people that begins and ends with the drinking of tea. This practice of sharing meals represents the vision of forming friendships and fostering a long-term peace among those who share the meal together. Prices for this meal range from Y5,000 to Y15,000 for two people.

Apart from these interesting facts, the most fascinating thing about Kanga-an is its openness to the idea of welcoming visitors to a small bar tucked on the side of the temple, which is said to be an old private room where the head priest would entertain important guests. The temple illuminates in the middle of the garden with its bright yellow lights. Small lanterns placed on the side of the pebbled pathway create a romantic, yet mysterious air to the place. A small door on the side of the temple, leads curious explorers to a world beyond ordinary temple architecture. The small bar has around 10 counter seats facing a lovely Zen garden. Its dim lights put every visitor in peace as soulful jazz plays in the background. A good selection of drinks, from red wine to bourbon, is also offered by a well-dressed bartender. Drinks cost around Y1,000 plus an additional table charge of Y1,000 per person. The bar is open from 5 p.m. to 1 a.m. and can be reached via the Karasuma Line by getting off at Kuramaguchi Station.

Though Kyoto has a number of small temples that may grow indistinguishable from one another, there are those that would stand out from the rest, if only explored with much curiosity. Kanga-an is undoubtedly one of those rare gems and it will surely never cease to surprise. - Words by Herlyn Alegre, Photographs by Din Eugenio

The Heart Speaks Louder Than Words in the Film 'Isa Pa, With Feelings'