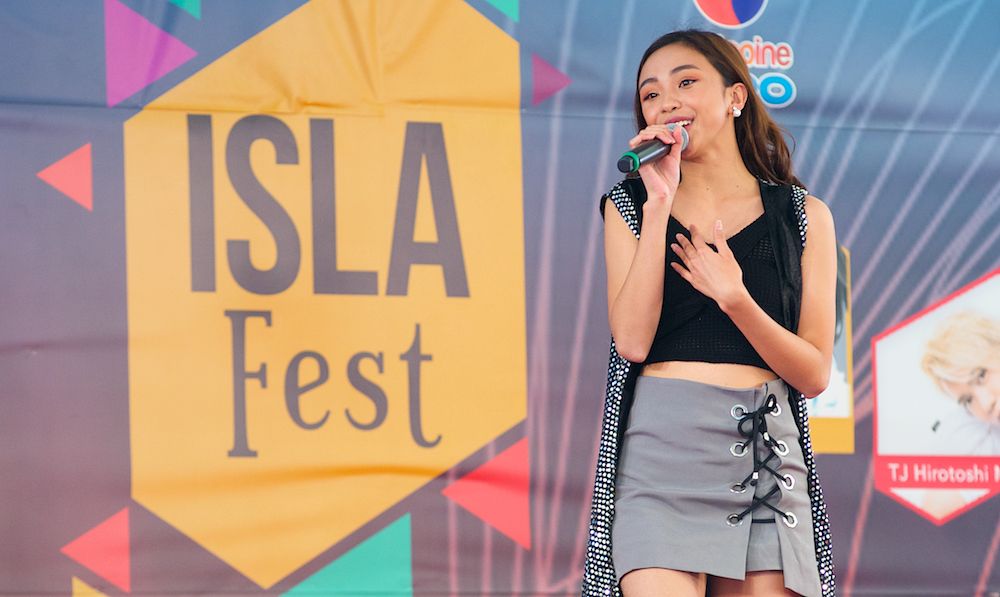 Maymay Entrata: From Fangirl to a Promising Star

TOKYO – It’s so easy to spot a celebrity in an event – he/she appears on stage and there is the deafening screams of fans who trooped to the place to have a glimpse of their idol. And this scenario happened the moment Kapamilya star Maymay Entrata came on stage at the first-ever Filipino-Japanese fusion festival, “IslaFest” that took place at Ueno Park in Tokyo last June 14 to 16.

Wearing a black tank top, buttoned gray skirt, and a long sparkling vest, the 22-year-old Pinoy Big Brother: Lucky 7 Season big winner sang Selena Gomez’s “Who Says” to the delight of her followers. The bubbly star gamely and comfortably mingled with her fans – shaking hands with some of them, waving and blowing kisses to the adoring crowd.

She also gave her rendition of the Japanese song “Anata Ni Aitakute” followed by a dance performance.

Organized by the Philippine Expo Organizing Committee in partnership with The Filipino Channel (TFC), Maymay was one of the ABS-CBN artists who performed at the successful three-day event. Other guest stars include Maymay’s love team partner Edward Barber, Inigo Pascual, Angeline Quinto and Jericho Rosales.

A Fangirl Through and Through

Now a celebrity star with thousands of fans, Maymay is first and foremost a self-confessed fangirl who would trooped to the malls to watch her favorite showbiz personalities on shows. In fact, in one of her Instagram posts with Daniel Padilla and Kathryn Bernardo, her co-stars in “La Luna Sangre,” Maymay divulged how she was hit by an umbrella because of her fangirling over KathNiel.

Now, the fangirl is a celebrity star herself with a number of achievements under her name that include being the Pinoy Big Brother: Lucky 7 Season big winner, first-ever Filipina celebrity to walk the Arab Fashion Week runway, German Moreno Youth Achievement Awardee at the 67th FAMAS Awards, to name a few.

She is also a recording star releasing a self-titled album in 2017, which achieved a platinum status last year. She has also just released a new single entitled “Kakayanin Kaya,” which topped the iTunes PH chart.

Her Connection to Japan

Maymay has the rags-to-riches story. Born in Camiguin and raised in Cagayan de Oro, her family used to have a hard time making ends meet. Her father left them when she was one year old, forcing her mother to leave her and her brother in the care of their grandfather to work in Japan.

The Kapamilya star found a way to help her family by auditioning at the PBB Teen edition where she won hearts because of her bubbly, authentic personality. She admitted that being hailed as the PBB big winner turned her life around. After coming out of the PBB House, projects came pouring in for the Pinay beauty who now endorses big brands and is a favorite magazine cover girl.

Maymay, who celebrated her 22nd birthday last May in Japan, couldn’t help but reflect on her journey where she emphasized her gratefulness for all the blessings she has received amidst the struggles and challenges that came her way.

Maymay is now at the top of her game, but the fangirl-turned-star has one valuable lesson that she will carry with her: to fulfill dreams by playing fair and square.

With this kind of attitude coupled with talent and passion, it’s no wonder that Maymay’s star will shine ever brightly. - Words by Nel Salvador, Photographs by Din Eugenio